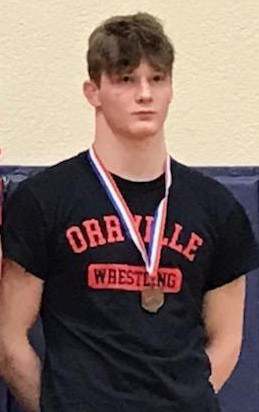 After a disappointing finish to his 2019 season, junior Cory Stiffler excelled in the 2020 Garfield Heights district tournament to take 4th place and earn a spot in the OHSAA State Championships held next weekend in Columbus. After narrowly losing the semi-final match in overtime, Stiffler was able to defeat Colt Edgar of Jefferson by a 13-5 major decision to secure entry into next week’s meet. Cory didn’t have an easy path to qualify. Of the five matches that he wrestled in the tournament only his first round match was against a wrestler that didn’t not place in the district meet. Cory will compete March 13-15 at the Schottenstein Center on the campus of The Ohio State University.

Additionally, seniors Kollen Butler and Coddie Phillips battled tough, however, they were unable to qualify for the state tournament. Kollen was winning late against Keyshaun Clark from Rittman, but he got caught in a cradle that proved to be the difference in the match. 2019 state qualifier, Phillips wrestled tough, but he couldn’t overcome a couple tough breaks. These young men have been an asset to our program.